Server concept
​
Experience gaining and production of high-level equipment is much easier compared to previous chronicles, and is mainly suited for a small group of 3-9 people. Even an ordinary player could achieve a good equipment for his character without spending a lot of time.

The server rates are set at x7, in conjunction with the PTS platform, which guarantees long-term stable operation of the server, enables long and pleasant gameplay.

Events of the game world:

For a more dynamic gameplay, the period of the Grand Olympiad is reduced to 2 weeks. The award at the end of the Olympiad period is reduced by 2 times. 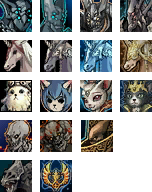 Changed skill enchant "Dead Eye".​
Decreases atk.speed penalty:​
"When skill is enchanted +30, there is no penalty on atk.speed."​
Hawkeye

Changed skill enchant "Snipe".​
Decreases speed penalty:​
"When a skill is enchanted +30, there is no penalty on speed." ​
Arbalester

Changed skill enchant "Sharpshooting".​
Decreases speed penalty:​
"When a skill is enchanted +30, the penalty on speed is 50%."​

Useful links for a comfortable game - start with pleasure